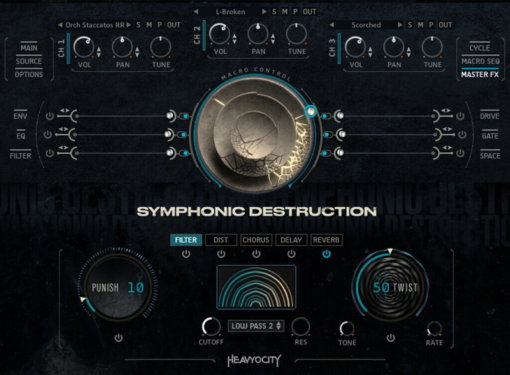 We've deconstructed the orchestra—rebuilding it from the ground up to push the bounds of power, creativity, and aggression in modern scoring. Thrilling traditional combinations. Visceral sound design. And the gnarliest Braams you've ever heard. The heart of Symphonic Destruction (the SD Designer) is all about POWER. We rebuilt the orchestra to combine creative organic, inspiring rhythmic, and signature sound design elements, unleashing a new generation of epic, cinematic scores. Whether you're scoring an intense chase scene or a nail-biting thriller, you're going to need dynamic rhythmic elements to drive your scene forward. Good thing SD includes nearly 100 inspiring rhythmic pedals, ranging from the sweet to the severe, the delicate to the destroyed. It's an all-new approach to orchestral scoring, combining traditional, hybrid, synth, heavy guitars—anything to level up the epic of your composition. One thing's for sure…the orchestra will never be the same. It's not just that Symphonic Destruction contains an insane amount of incredibly-usable hybrid cinematic content. It's that the powerful SD Engine also contains the sound-shaping capabilities to never stop making that content new. True inspiration in an instrument comes from the power to move, to challenge, and to inspire the composer. Symphonic Destruction is up to the task. Fire it up, and you'll see: In preset after preset, patch after patch, there's a film cue laid out across the 88 keys.